Welcome to the article where you will be learning about an important artist of the last century: Paul Klee. I hope you enjoy the reading and learn a lot of Paul Klee facts. So, let’s start with his background. 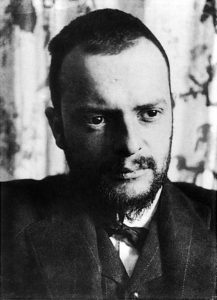 Who is Paul Klee?

Born in 1879, Paul Klee was an artist with an individual style influenced by Cubism, Surrealism, and Expressionism. He started as a draftsman (who makes detailed drawings) and then did a profound study on color theory. Paul Klee Notebooks, a two-volume compilation of his lectures at Bauhaus schools, are extremely important for modern art and have been compared to A Treatise on Painting, by Leonardo Da Vinci. He died at 60, in 1940.

Paul Klee was the son of Hans Wilhelm Klee, a German music teacher, and of Ida Marie Klee, a Swiss singer. His father studied piano, organ, violin, and voice at the Stuttgart Conservatory.

Following the path of his parents, he started to study violin at 7, and by 11, he was so talented that he was invited to play at the Bern Music Association as an extraordinary member. However, he was not interested in modern music, so he started to lean towards visual arts when he was a teenager.

2. Although Paul Klee did a profound study about the color theory, he wasn’t really good with color at first.

While he was at school, he showed skill with lines, and he used to prefer drawing caricatures. When he was 16, he painted “My Room” with pen and black ink.

In 1898, he started his studies at the Academy of Fine Arts, in Munich. There, he demonstrated his extraordinary skills at drawing but struggled with color. After a few years, he started to experiment with colors when he graduated and traveled to Italy and Paris.

3. He was born in Switzerland, but he didn’t have the Swiss citizenship.

Paul Klee was born in Münchenbuchsee, Switzerland. However, according to Swiss law, citizenship was determined along paternal lines, so he inherited the German citizenship from his father.  Klee grew up in Berne and went there often. In 1933, he applied for Swiss permanent residency permit because he decided to move there permanently. The permit was issued in 1936, but then he had to wait two years for naturalization. He applied for citizenship in 1939. Funny fact about Paul Klee is that the authorities gave him the citizenship too late, in July 1940, a month after his death.

4. He was part of two artists’ groups.

The Blaue Reiter was a group of artists linked to Expressionism, founded by Wassily Kandinsky and Franz Marc. After meeting them, Klee became part of the editorial team of the almanac Der Blaue Reiter. He wasn’t an official member of the group, but his participation as an independent member was important. As a member, he participated in an exhibition with 17 graphic works and helped with the publication of the almanac.

He was also part of Die Blaue Vier (The Blue Four). This group was founded by him and three other members in 1923.

5. Because he was a German citizen, he served in the First World War.

Paul Klee served in the military but never fought in the frontline. At first, he was a soldier behind the front, but after a while, he was assigned to do manual work. And finally, he was a clerk in Gersthofen until the war finished. However, the death in battle of his friends August Macke and Franz Marc affected him. This trauma can be seen in the works he did during the war like the painting”Death for the Idea”.

The Bauhaus was a German art school that was created with the idea of making a “total work of art”, which meant that all arts would be brought together. He was a professor there from 1921 to 1931. From 1931 to 1933, he taught at the Düsseldorf Academy. However, he was reported by the Nazis for making “degenerated art”, so he decided to go back to Switzerland.

7. He suffered from scleroderma.

During the last years of his life, he suffered from scleroderma, which is a group of autoimmune disease that affect the skin. In 1940, he was admitted to a hospital in Locarno, Switzerland, where he died.

8. He was a prolific artist.

Throughout his life, he finished more than 9,000 works. Just in 1933, he completed 500 pieces of art. In 1939, a year before he died, he finished 1,200. Although this shows that the pain from his disease was not an obstacle for him, his discomfort was shown in his pieces of work. This can be observed in Death and Fire (1940).